Angus Ashton Film provides videography in Melbourne and Hobart for Indigenous Media - filming a number of short form documentaries as part of their Award winning 60 Second Doc's (60SD) Series. As of 2020, Indigenous Media has produced over 550 documentaries in the series, generating over 4 Billion views and 7.5 million followers. The Webby Award winning series provides a refreshing look into the worlds most unique characters, trends and lifestyles. Each episode of the mini documentary series is 60 seconds in length. Since 2017 Angus Ashton Film has shot numerous 60SD episodes, with videography in Melbourne provided for 'Mosquito Man', 'The Streets Barber', 'Meghan Markle's Macaroni Jeweller' and 'World Latte Art Champion' and videography in Hobart for 'Teddy Bears for Cancer'.

Along with providing a Videographer in Melbourne and Hobart, after each shoot we swiftly uploaded the footage to Indigenous Media and their editors, ensuring it met their post-production schedule and prolific output of episodes. 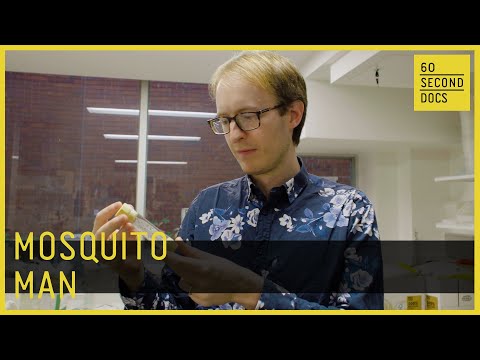 In addition to conducting research on mosquito traits and their lifespans, the job of Mosquito-Man (aka Dr. Perran Ross) as an experimental biologist includes sticking his arm inside mosquito cages and letting them bite for ten seconds. His biggest haul was 15,000 mosquitos.

Nasir Sobhani of Victoria, also known as 'The Streets Barber', gives free haircuts to homeless people to help them feel clean, empowered and understood. Life on the streets is rough, with homeless people often ignored or abused to the point that they no longer feel human - and Nasir, a former drug addict himself, is out to change that with a salon-style makeover. For him, it all starts with a pair of clippers and a clean cut.

6-year-old Gavin Hazelwood from Australia gave Meghan Markle a homemade macaroni necklace. After his exchange with the Duchess of Sussex went viral, people from all around the world wanted to buy his gold-painted pasta jewelry. Now, Gavin sells his necklaces for charity and has raised over $15,000 to support research for stillborn babies. Angus Ashton Film was Melbourne Videographer for the piece.

Caleb Tiger Cha, aka @calebtiger on Instagram, took an unusual path in becoming a latte artist. The Seoul, Korea native began his career in financial consulting, but felt something missing. So Cha moved to Australia, but had trouble finding a job -- until he realized Melbourne was a coffee capital and connected the dots. Now the 2015 World Latte Art champion etches tigers, unicorns and more into flawlessly foamy drinks, capitalizing perfectly on the marriage of ephemeral beauty and coffee that is latte art. Angus Ashton Film provided videography work for the piece in Richmond.

Inspiration struck when 13-year-old Campbell Remess of Tasmania, Australia realized that very sick kids, particularly those fighting cancer, had to spend holidays in the hospital. He yearned to give every kid in his local hospital a teddy bear for comfort, but his family couldn’t afford it. Instead, then-9-year-old Campbell learned how to use a sewing machine, founded Project 365, and started making teddy bears himself. Now he’s gifted hundreds of unique and comforting stuffed bears to families all over the world -- all for the love of giving back. Videography in Hobart for this video was provided by Angus Ashton Film