Revisiting the site of the former American Firebase in 2012.

Today vegetation has reclaimed the site and all that remains is crumbling concrete and the old road to the top of the hill. The Firebase is known among Americans for Bardstown, Kentucky; a small town that lost a disproportionately large number of national guardsmen in combat on the hill in 1969. Many soldiers from both sides were killed on this hill and in recent years there has been efforts to recover their remains. An American News documentary crew also visited the site in the mid 1990's. Angus Ashton Film visited the site in 2012. 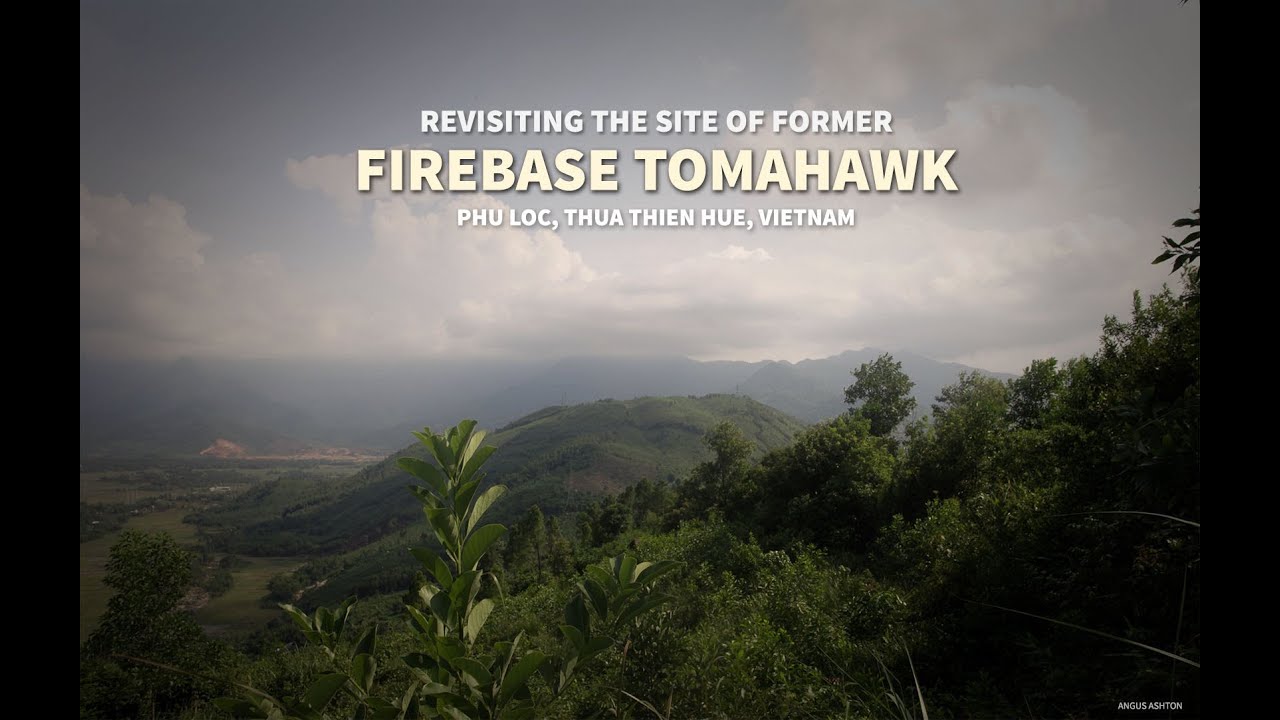 Above: The area around former FSB Tomahawk in 2012 and in 1969. The image is not taken from the exact same position however note the same sloping hill face in both images at centre left. This hill lies south west of the site of the former base. (lower image sourced from Kentucky Thunder in Vietnam: History of 2nd Battalion, 138th Field Artillery in the Vietnam War, 1968-1969, John Michael Trowbridge, 2010)

Above: Crumbling remains at the site of FSB Tomahawk, 2012. This image is taken towards the top of the hill.

Above: This image is taken towards the base of the hill near the beginning of the former road to the top, and a sharp turn in the highway. A single shop and home stood there in 2012 and the elderly male owner recalled meeting the American vets and news crew who visited in the 1990s.

Above & Below: These images give an idea of FSB Tomahawk's proximity to FSB Roy, Phu Bai Airport and Hue City. The base is about 55 mins from Hue and around 44km in distance. At the base of the hill where FSB Roy once stood a resort has been built called Verdana Lagoon Resort & Spa Hue.

Above: The images show Highway 1 looking south towards Lang Co and Da Nang and the former sites of Hill 88/FSB Denise and Firebase Los Banos, the later of which was positioned near Phu Gia pass and had a commanding view over Lang Co. The top image was taken in October 2012 from the site of former FSB Tomahawk. It was taken further West along the ridge line and at a different focal length in comparison to the lower image from the late 1960s . Both the hill and the surrounding flat plains have seen considerable re-vegetation since the end of the war. (lower photo sourced from: Kentucky Thunder in Vietnam, John M. Trowbridge, 2010)

The U.S National Guard had a policy called infusion that was designed to prevent too many men from the same hometown and unit dying in a single action. Troops belonging to the same hometown were divided to prevent small towns in America loosing large numbers of soldiers in single engagements. The infusion program was however unable to avert fate at Firebase Tomahawk where on the night of June 19th 1969, 10 soldiers from the small town of Bardstown, Kentucky, were killed in combat with NVA troops. The population of Bardstown at the time was 6000.

Above: Vietnam Vets who revisited Firebase Tomahawk in the mid 1990's as part of a Kentucky News Station Documentary story. "Parrish, Hibbs and five other Charlie Battery veterans, all but one of whom were on Tomahawk when it was attacked, returned to Vietnam in 1995. A crew from WHAS accompanied them and won an Emmy for the resulting documentary." Image with thanks to WHAS Kentucky.

Update: in 2019 a documentary film by John Coulter “Firebase Tomahawk" was released.